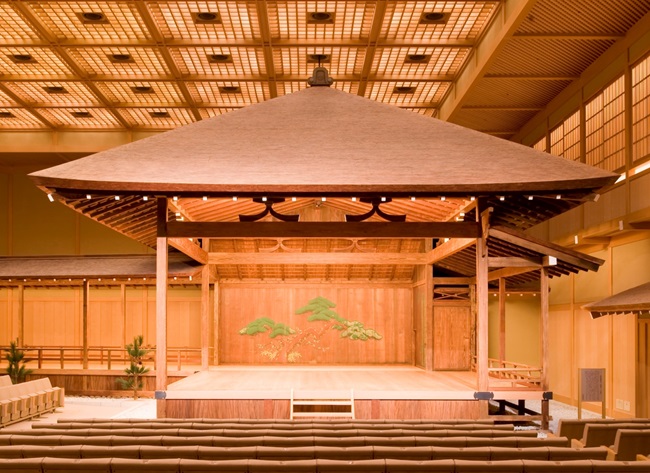  Yokohama Noh Theater
Noh is a form of classical Japanese performing arts that has been inscribed as UNESCO Intangible Cultural Heritage.
Did you know that there is a Noh theater here in Yokohama?
The Noh stage at Yokohama Noh Theater was constructed in 1875 for the estate of Nariyasu Maeda, former lord of the Kaga Domain in Negishi, Tokyo. In 1919, it was moved to the estate of Yorinaga Matsudaira in Yoshino, Tokyo, where it was known as the Somei Noh Stage. The stage was dismantled in 1965, but was later restored using the original materials, which had been preserved, gaining a new lease of life as a Noh stage with the opening of Yokohama Noh Theater in 1996. This stage has been designated as a Tangible Cultural Property by the City of Yokohama.
The panels at the back of Noh stages typically only display a painted pine tree, but Yokohama Noh Theater is extremely unusual in that, in addition to a pine tree, it also features plum blossoms and dwarf bamboo.

 Japanese cultural experience program
During the Rugby World Cup 2019TM, for which Yokohama is hosting some matches, Yokohama Noh Theater will open its doors to visitors, who will be able to come and look around the main stage and dressings rooms, and experience such things as the opening of the stage curtain.
There will be panel explanations in English, allowing you to enjoy an informative guided tour while soaking in the atmosphere of this quintessential Japanese setting.
This guided visit is perfect for those who have never seen Noh or Kyogen, as well as those who are interested in classical Japanese performing arts but feel it is not very accessible.
Yokohama Noh Theater not only stages classical Japanese performing arts, primarily Noh and Kyogen, but also holds a range of other original performances, such as new works produced through collaborative programs with performers from different countries and art fields.
English guides are provided for each performance, and you can also purchase tickets from the theater’s English language website.

 Nogaku (Noh and Kyogen)
Noh and Kyogen are inseparable forms of performing arts, which is why they are referred to collectively as “Nogaku.”
Noh is Japan’s oldest type of lyrical drama, with a history stretching back over six centuries. As with musicals and opera, it comprises of music in the form of “hayashi” (musical accompaniment) and songs called “utai” (more along the lines of chanting than actual singing), together with a type of classical Japanese dance known as “mai.”
Kyogen is a more comic form of theater, and is performed on the same stage as Noh. It is a deep and highly artistic form of performing arts, incorporating all of the human emotions within a single comic sketch. It is a lot less formal than Noh, employing slapstick within the repertoire; at the same time, however, it is founded on the same fundamental elements of song and dance.