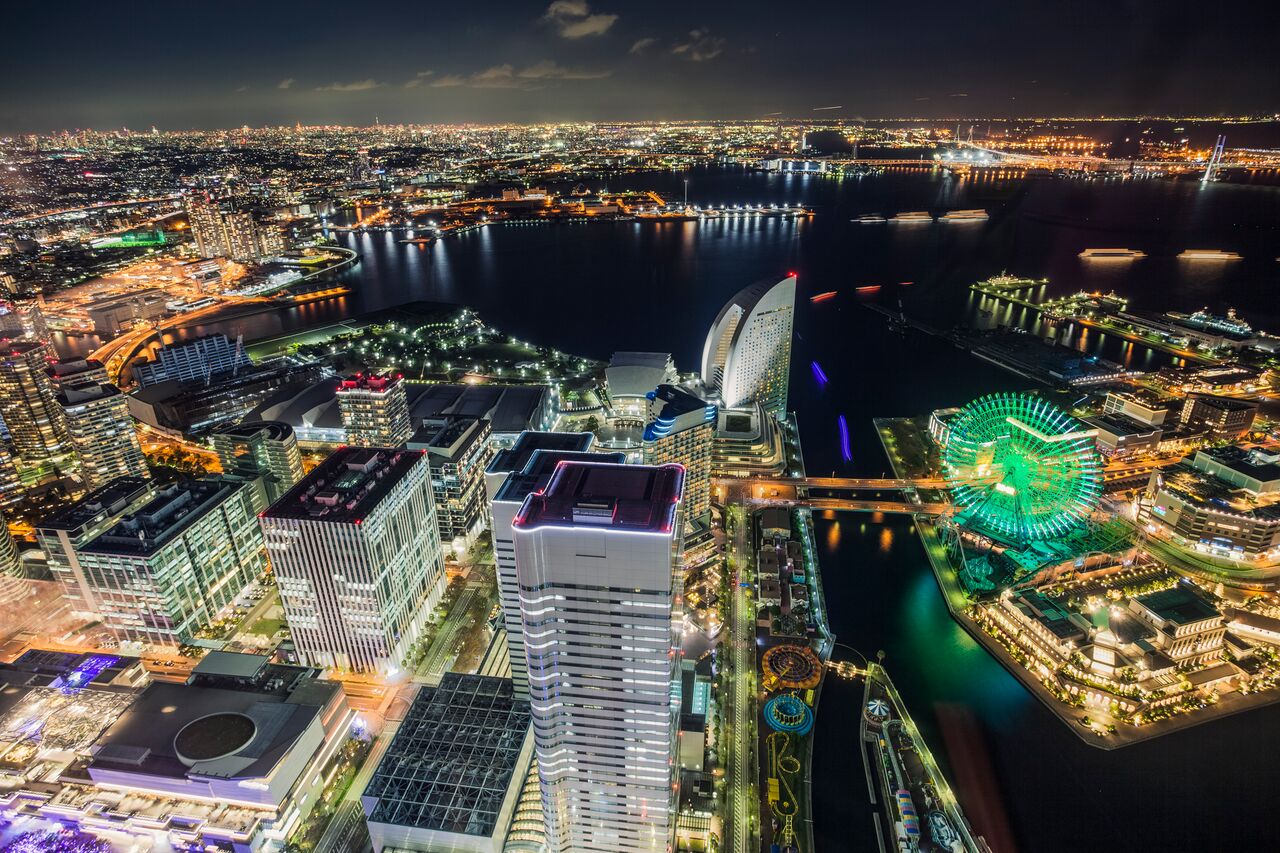 One of Japan’s most popular tourist destinations, Minato Mirai (meaning Harbor of the Future) is a picture-perfect and extremely romantic port area that looks best at night when the futuristic buildings are lit up. Depending on where you are, the view can be jaw-dropping. So, where are the best vantage points to see such a majestic sight? Here are five places we recommend you visit to enjoy Yokohama’s spectacular night view.

Stretching your legs at the observation foot bath on the rooftop (9th floor) of the Minato Mirai Manyo Club must be the most relaxing way to enjoy Yokohama’s night view. The dazzling Cosmo Clock 21 feels almost close enough to touch while Bay Bridge on the other side also looks stunning. The water at the Manyo Club is imported from hot springs in the onsen towns of Yugawara and Atami six times a day on a 20,000-liter tank lorry. It is effective for nerve, muscular, and joint pain as well helping with recovery from fatigue. There's a variety of hot spring baths both inside and outside as well as ganbanyoku (stone baths), restaurants, massage parlors, lodgings, and much more.

Japan’s second tallest building (standing at a height of just over 296 meters), Yokohama Landmark Tower has a wide variety of dining and shopping options as well as a luxurious hotel. The highlight of the tower, though, is undoubtedly the Sky Garden, a 360-degree observation deck on the 69th floor. In addition to Minato Mirai just down below you can also see many of Tokyo’s well-known spots such as Tokyo Tower and Skytree as well as some far away mountains including Mt. Fuji (all depending on the weather). While up there it’s also nice to sit back and relax with a beverage or two. Sky Cafe has a broad menu with a good selection of beers, cocktails, and soft drinks, along with refreshments.

Want to go even higher? How about a bird’s eye view of the city from a helicopter that rises up to 600 meters at a speed of 250km/hour? The Yokohama Sky Cruise is a short but truly unforgettable and romantic experience that will leave you wanting to immediately go back up. The best seat in the helicopter is next to the pilot, though the view is stunning wherever you sit. There are various options available including “Queen” which is a five-minute ride taking off at sunset, and “King” which is the same length of time but departs after sunset, so you can peer down at the magnificent lights below. If five minutes isn’t enough you can go “Gold”, doubling the amount of time in the air. Charter options are also available.

Heading back down closer to earth, Osanbashi Pier is one of the best locations in Yokohama to view the mesmerizing nightscape. It’s also one of three places from which Yokohama’s three towers (the King, Queen, and Jack) can be seen at the same time. Originally built towards the end of the 19th century, it is the city’s oldest pier. The newly reconstructed version was completed in 2002. Former husband-and-wife team Alejandro Zaera-Polo and Farshid Moussavi won an international design competition that attracted over 660 entries. It is an architectural masterpiece with a unique form and numerous curved surfaces. The standout feature is the charming rooftop observation deck with wooden flooring and a grass lawn that is a great place to chill-out on while gazing out at the wondrous Minato Mirai lights.

From Osanbashi it’s then just a short walk to the Red Brick Warehouse Pier, the departure point for various sightseeing cruises. One of the most enjoyable is the Factory Night View Jungle Cruise, a 100-minute tour operating in the evenings of Friday, Saturday, and Sunday. A trend known as Kojo Moe (factory fascination) began around a decade ago thanks to a photo book by Ken Oyama and Tetsu Ishii. Since then Kojo Yakei (factory night view) tours have become extremely popular, not because they’re educational but due to the mysterious beauty of the spiderweb-like steel constructions. The Jungle Cruise quickly heads past numerous bridges and ships before slowing down at Kawasaki’s industrial area for some fantastic photo opportunities. The breath-taking view of Minato Mirai awaits on the return leg of the tour.

Find out more on Bars and Nightlife!