Architectural Guide to the Yokohama Skyline 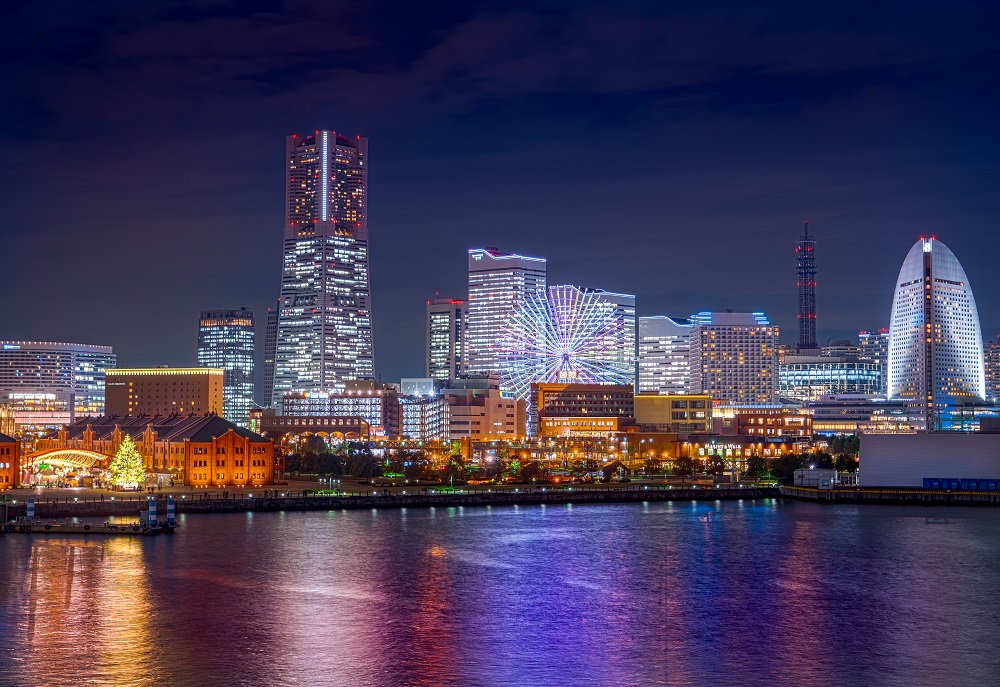 Simply stunning is one way to describe the Yokohama skyline. The buildings and attractions along the waterfront of the Minato Mirai 21 district are a sight to behold at any time of the day, though look particularly enchanting at night.

Along with the 296-meter Yokohama Landmark Tower and Cosmo Clock 21, there's also the Yokohama Three Royal Towers. These magnificent structures were once regarded as a point of reference for foreign sailors entering the port as there weren't many other high-rise buildings in the first half of the 20th century. The sailors nicknamed the towers King, Queen, and Jack. The trio of buildings all had to be restored after being destroyed by the Great Kanto Earthquake of 1923.


The Kanagawa Prefectural Government building is the King. Rebuilt in 1928, the centrally elevated neoclassical structure with a Japanese-style roof is known as a Teikan Yoshiki (Imperial Crown style) building and is one of the first of its kind. Modeled after a five-storied pagoda, it’s been designated as a tangible cultural asset. The best time to see its exterior is between sundown and 10 pm when the place is lit up. As for the interior, a historical exhibition hall and a rooftop observatory can be visited on weekdays.

Rebuilt six years after the King's Tower, the Yokohama Customs building, affectionately known as the Queen's Tower, stands 51 meters tall making it the highest of the Yokohama Three Royal Towers. A refined looking structure, it features a green mosque-style dome and beige tiles. The information exhibition hall on the first floor named "Queen no Hiroba" (Queen's Square) is open to the public every day except for national holidays. Admission is free.

The third of the Yokohama Three Royal Towers is arguably the most aesthetically pleasing. The Jack Tower i.e. the Yokohama Port Opening Memorial Hall, celebrated its 100th anniversary in 2017. Though originally built during WWI, it had to be restored a decade later after burning down because of the earthquake. The red brick building design is known as a Tatsuno free classic style, named after Tatsuno Kingo, designer of Tokyo Station's Marunouchi building. Inside there are stylish hallways and staircases along with two stained glass windows.

There are three spots in Yokohama where you can see the trio of Yokohama Three Royal Towers at the same time: In front of the Kanagawa Prefectural Government building on Nihon Odori Street, at the Osanbashi International Passenger Terminal, and the Red Brick Warehouse. Superstitious people may want to visit the three vantage points in one day as they’re relatively close to each other, and according to legend, all your wishes will come true if you do.

Throughout the second half of the twentieth century, more and more buildings started to take shape along the waterfront with the most recognizable being Yokohama Landmark Tower. When construction finished in 1993, the near 300-meter structure was the tallest building in Japan, though has since been surpassed by Abeno Harukas in Osaka. The observatory deck offers 360-degree panoramic views of Yokohama and the bay area. On clear days, Tokyo Tower, Skytree and Mt. Fuji can also be seen. Those wishing to stay the night can book a room at the Yokohama Royal Park Hotel which starts on the 52nd floor, going up to the 67th.

The Yokohama skyline features many luxurious hotels including Yokohama Bay Hotel Tokyu and the InterContinental Yokohama Grand, both of which have state-of-the-art, spacious rooms and all the amenities you could hope for. The latter has become one of the city's most symbolic architectural structures as it was designed in a way to evoke an image of a white sail against the blue sea.

If the InterContinental is the yacht on the ocean then the Exhibit Hall of PACIFICO Yokohama is the wave crashing against it, while the Convention Center resembles a shell. One of the largest convention complexes in the world, PACIFICO Yokohama is an all-in-one venue that hosts MICE (Meetings, Incentives, Conferencing, Exhibitions) and much more for both domestic and international audiences.

It’s then just a short walk to the Cosmo Clock 21, arguably Yokohama skyline’s most notable sight, which was the world's largest Ferris wheel when it was built in 1989. There are 60 gondolas each capable of carrying up to eight people that run a full-circle every 15 minutes. The famous clock/wheel is at its magical best at night when illuminated and the lights change colors.

For more information on each buildings, check out the link below.