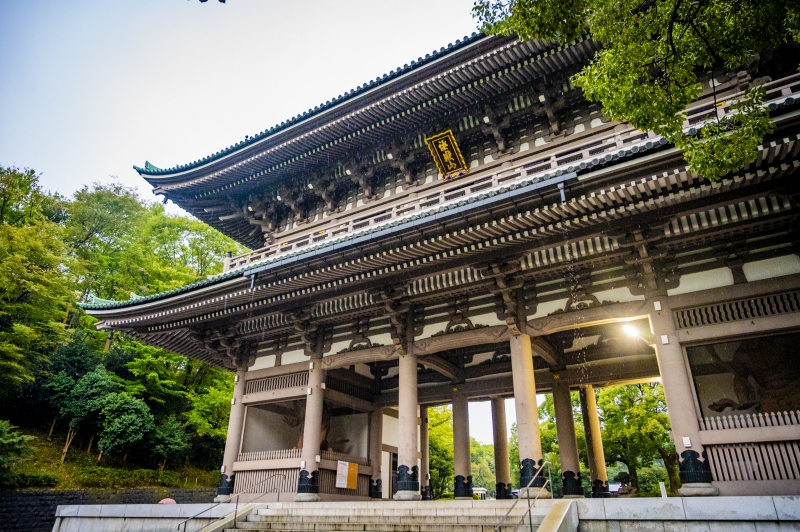 One of Yokohama’s most charming aspects is its mixture of old and new. By exploring some of the city’s oldest temples and shrines — many of them tucked away in urban oases — you can appreciate the contrasts even more.

Yokohama’s oldest temple is a testament to the dedication to the preservation of important pieces of cultural history in Japan. There is evidence that Gumyoji’s main hall was completed on March 10, 1044. Though the hall was rebuilt in 1766, the temple’s statue of the eleven-faced Kannon is believed to have been carved around the same time as the temple’s founding. It’s an intricately sculpted wooden statue that stands over 180 centimeters in height and is both a National Treasure of Japan and a National Important Cultural Property. Though Gumyoji’s grounds are comparatively small, they are filled with unique sights and many fascinating carvings. Take time to look at the details, which will slowly but surely reveal themselves to you.

Known as the Ise Jingu of the Kanto region, Iseyama Kotai Jingu is an important shrine both within the Shinto religion and Yokohama. It is so centrally located it overlooks the Minato Mirai area, but its hilltop location makes it feel hidden away from the rest of the world. The shrine moved here in 1870 on the cusp of great change in Japan and as Yokohama opened its port to the world. People from all over the country gathered here for work creating a vibrant, but divided atmosphere. When Iseyama Kotai Jingu relocated they held a huge festival and this is said to have been the catalyst for the citizens of Yokohama to feel united. The festival was so significant that May 15 — the annual festival day — was a public holiday in the city for a long time. Now, Iseyama Kotai Jingu’s picturesque surroundings are popular for weddings and in spring, when cherry blossoms line the steps up to the main hall.

Sojiji is one of two head temples in the Soto Zen Buddhism school, the other being Eiheiji in Fukui Prefecture. The temple was established in 1321 and moved to its current location in 1911. Most of the buildings on the vast, 500,000-meter-squared temple grounds are from this later period.
Sojiji is an internationally recognized as a temple of Zen practice, and lots of visitors from all over the world come here to take part in zazen sessions, take guided English tours and stroll the Zen garden.* The temple has close ties with the local community — it manages educational institutions and holds multiple community events annually. The most popular event is the Mitama Festival Bon Odori held in July, which brings thousands of people from near and far. For those interested in shojin ryori (vegetarian Buddhist dishes), check Sojiji’s official website.

Saihouji: Flowers in All Seasons

Saihouji offers an escape from the busyness of the city without leaving Yokohama. Founded in Kamakura about 800 years ago, the temple moved to Yokohama around 500 years ago. This tranquil space opens with a long approach and a thatched roof gate. The main hall, built around 300 years ago, also has a thatched roof — a rare sight. Saihouji is most famous for its abundance of flowers and its vibrant blossoms attract visitors all year round. In spring there are cherry blossoms and magnolias, while summer brings azaleas, irises, hydrangeas and more. Autumn offers another color explosion with spider lilies in an array of red, yellow and pink. Winter boasts camellias and yellow plum blossoms known as robai.

Note: Business hours and services may differ due to the impact of Covid-19